"I Can Problem Solve"

For Families | For Schools

Raising a Thinking Child:
I Can Problem Solve (ICPS) Program For Families

The focus of this program is on developing a set of interpersonal cognitive problem solving skills that relate to overt behaviors as early as preschool. By enhancing ICPS skills, the ultimate goal is to increase the probability of preventing later, more serious problems by addressing the behavioral predictors early in life. In addition to behavioral outcomes, the parent intervention is designed to help parents use a problem solving style of communication that guides young children to think for themselves. The program was originally designed for mothers or legal guardians of African-American, low-income four year-olds. The program now includes parents of children up to age seven and has been expanded to include middle and upper-middle income populations in the normal behavioral range as well as those displaying early high-risk behaviors. These include those diagnosed with ADHD and other special needs.

The program takes a minimum of 6 weeks, although 8 weeks is more ideal to help parents learn the problem solving approach. The first section focuses on learning a problem solving vocabulary in the form of games. The second section concentrates on teaching children how to listen. It also teaches them how to identify their own and other's feelings, and to realize that people can feel different ways about the same thing. In the last section children are given hypothetical problems and are asked to think about people's feelings, consequences to their acts, and different ways to solve problems. During the program parents are given exercises to help them think about their own feelings and become sensitive to those of their children. Parents also learn how to find out their child's view of the problem and how to engage their child in the process of problem solving.

Among low-income African-American mothers, one pilot and two hypothesis-testing studies were done with their four-year-olds, and a three year follow-up with mothers and their six to seven year olds. Among middle and upper middle-income Caucasian families, two qualitative service evaluations by staff of mental health associations were conducted. With over 100 families participating in the research and evaluations, relatively normal children with varying degrees of high-risk behaviors, as well as those with ADHD, significantly improved in alternative solution thinking, consequential thinking, and high-risk behaviors both in school and at home.

Order the Raising A Thinking Child Workbook at Research Press.com.

I Can Problem Solve for Schools

Program Overview
The I Can Problem Solve (ICPS) is a school-based intervention that trains children in generating a variety of solutions to interpersonal problems, considering the consequences of these solutions, and recognizing thoughts, feelings, and motives that generate problem situations. By teaching children to think, rather than what to think, the program changes thinking styles and, as a result, enhances children’s social adjustment, promotes pro-social behavior, and decreases impulsivity and inhibition.

Program Targets
The program was originally designed for use in nursery school and kindergarten, but it has also been successfully implemented with children in grades 1 to 6.

The intervention begins with a series of lessons that teaches preschool and kindergarten children basic skills and problem-solving language. For example, children learn word concepts such as not (e.g., "Is that a good idea or not a good idea?"); same/different (e.g., "Can you think of a different way to solve this problem?"); if...then (e.g., "If you hit Johnny, then what might happen?").

The lessons for all age groups focus on identifying one’s own feelings and becoming sensitive to others’ emotions. Students learn to recognize people’s feelings in problem situations and realize that they can influence others’ responses.

The last set of lessons utilize role-playing games and dialogue to promote problem-solving skills. Students generate solutions to hypothetical problem situations and consider the possible consequences to their decisions.

Program Implementation
To provide an opportunity for all children to participate, Preschool and Kindergarten lessons should be conducted in two groups, each group consisting of 1/2 the class (over 3-4 month period). If daily lessons for each group are not feasible, then alternate days for lessons so that each group receives lessons at least twice a week. From 1st grade on it is more feasible to conduct the lessons with the whole class.

A five-year study including inner-city, low income children in nursery school and kindergarten demonstrated that intervention children, compared to control students, had:

A replication with fifth and sixth grade students found that ICPS children, compared to a control group, demonstrated:

For information on Dr. Shure's books on I Can Problem Solve for Schools, visit Research Press.com. 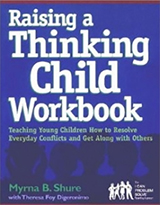